QK-A034 is a sophisticated NMEA 2000 to WiFi and USB multiplexer, with added flexibility for your growing system.

Enjoy a direct WiFi link to your NMEA network data, for convenient and flexible access to your marine data. And as the WiFi connection is 2-way, you can also send data, including Waypoints to your chartplotter and autopilot.

In addition to bi-directional NMEA 2000 to WiFi and USB, the A034 provides a seamless connection of NMEA 0183 and Raymarine SeaTalk1 input devices.

(If you also require NME A0183 output, select the A034-B which has this additional output.)

See the table below for inputs and outputs of both the A034 and A034-B to help you select the right option.

The A034 is a flexible device and the connections can be tailored to your individual setup.

Below is an example setup. Whether you input devices (eg.GPS, AIS, wind. depth and other sensors) are SeaTalk1, NMEA 0183 or NMEA 2000, simply connect them to the correct input connection. 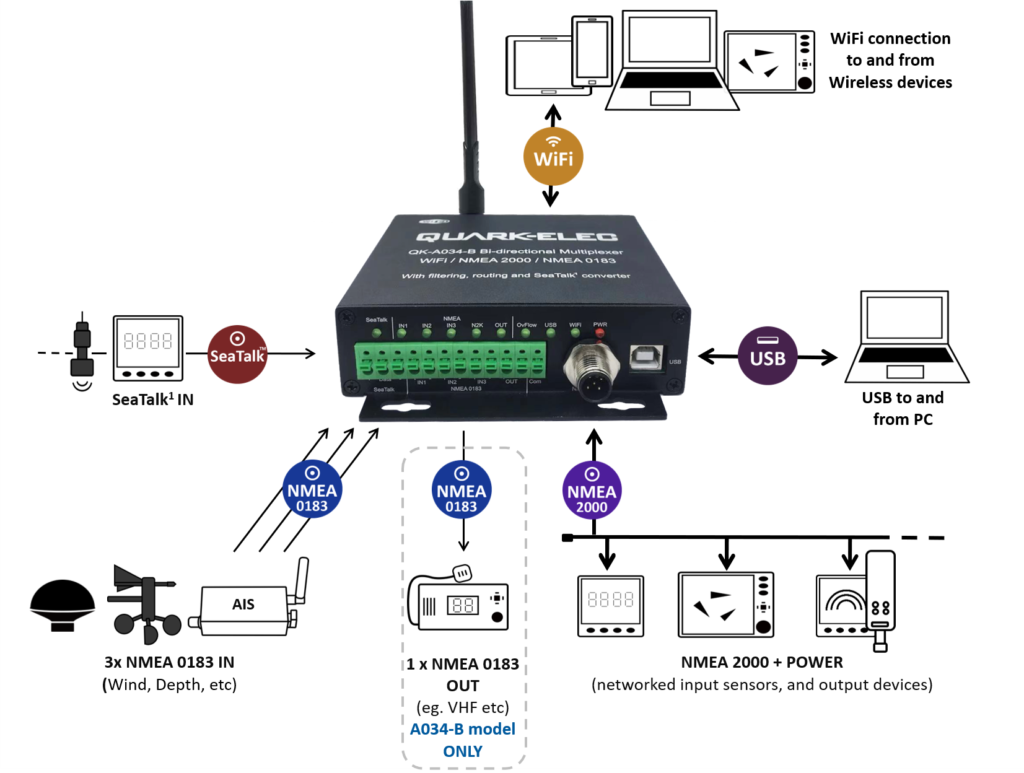 The A034 can be used out of the box for standard functionality or configured for additional sophistication.

Without Configuration: The multiplexer converts and combines data received on the listener ports and sends this data to NMEA 2000, NMEA 0183 (A034-B) WiFi and USB simultaneously. Default Baud rates: NMEA input 1 and 2: 4800bps and NMEA input 3: 38400bps 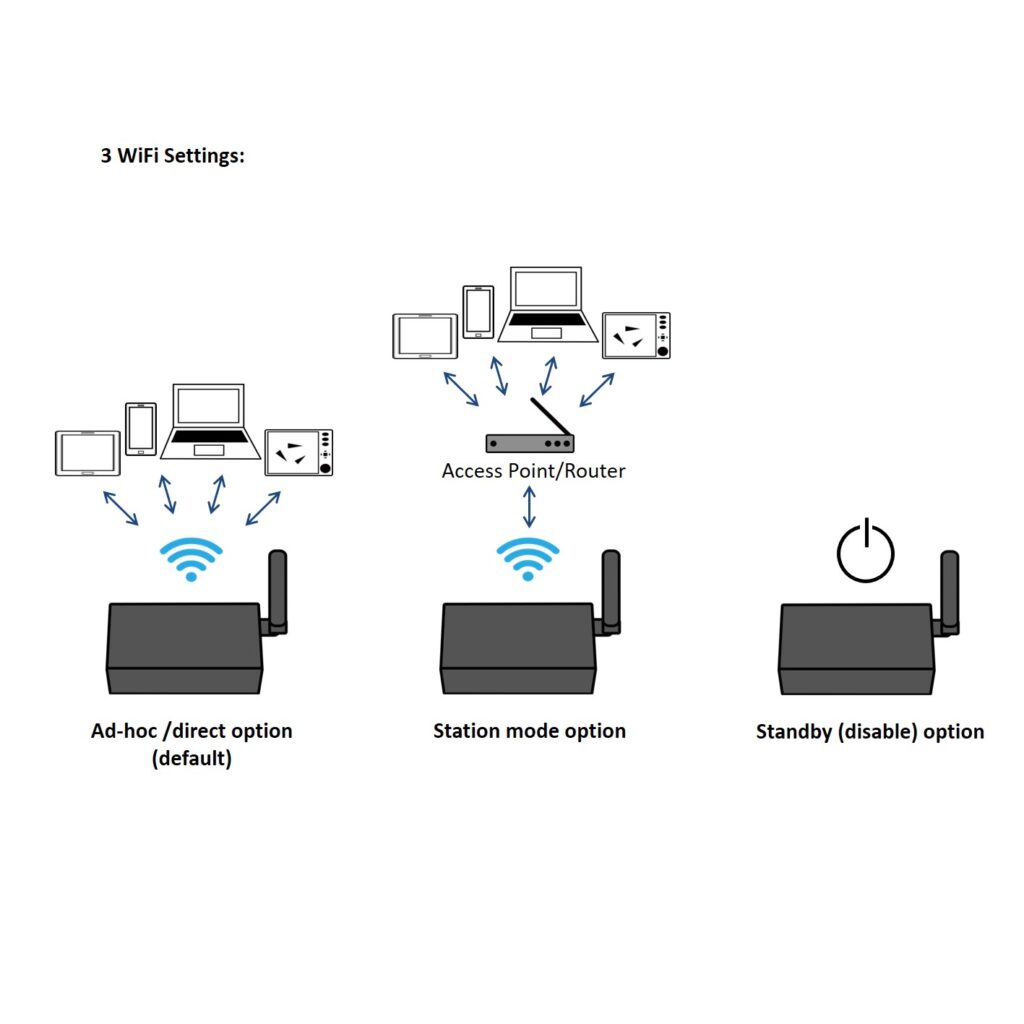 The WiFi module is set for direct Ad-hoc WiFi connection as default, with no need for a router. The SSID and password can be changed through QK-A034 configuration software, increasing security and memorability.

Up to 4 wireless devices can connect directly to the A034 in Ad-hoc mode.

QK-A034 can also be connected via Station mode using the Configuration software. This allows for greater range and remote access, as well as additional multi-device access.

The WiFi can also be disabled and be placed on Standby mode if desired.

Bi-directional WiFi: With 2-way WiFi, the A034 allows for wireless connection to autopilots and other NMEA devices, giving you the freedom to navigate, monitor and control from your iPad, iPhone, Android tablets and other WiFi enabled devices.

Bi-directional USB:  2-way USB the A034 allows the user to send instructions and data through USB from a laptop to all connected outputs. Frequently used to control autopilots and other NMEA devices from OpenCPN and other PC software, allowing the user to navigate, monitor and control from your laptop. This feature also allows for sending of test data for system testing and analysis.

FAQ – Will I need a Protocol bridge to connect NMEA 0183 devices? The answer is probably not…

This product uses the NMEA 0183-RS422 protocol (differential signal), however, some older chart plotters or instruments may use the older NMEA-RS232 protocol (Single-ended signal).

Connecting the A034 to an older (RS232) instrument or Chartplotter is not a problem, simply use the QK-AS03 Protocol Bridge. This connects NMEA-RS232 wiring to MNEA0183-RS422 and vice versa, using a simple ‘Plug ‘n’ Play’ connection, with no setup or configuration needed. 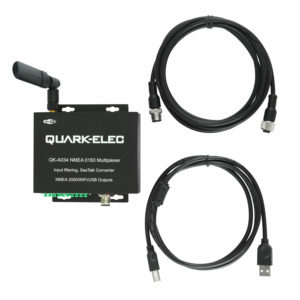 For any technical questions regarding this product, you can visit the forum at https://www.quark-elec.com/forum/ and ask us your question,  it’s regularly checked by our technical team and your question may already have been answered there.

Alternatively, contact us directly, with details of your set up and we will be happy to help.

The QK-A034 comes preloaded with drivers.

The device driver is a file that lets the computer know the configurations and specification of the AIS receiver. In case you’ve had software issues, the driver can be downloaded below. 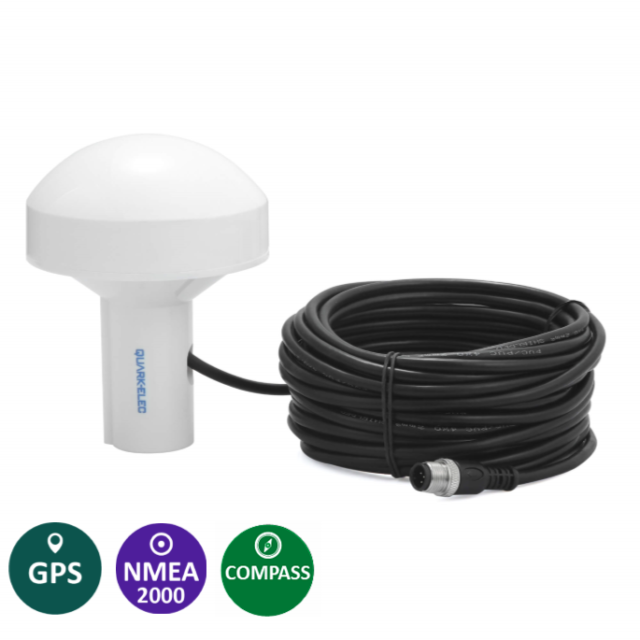 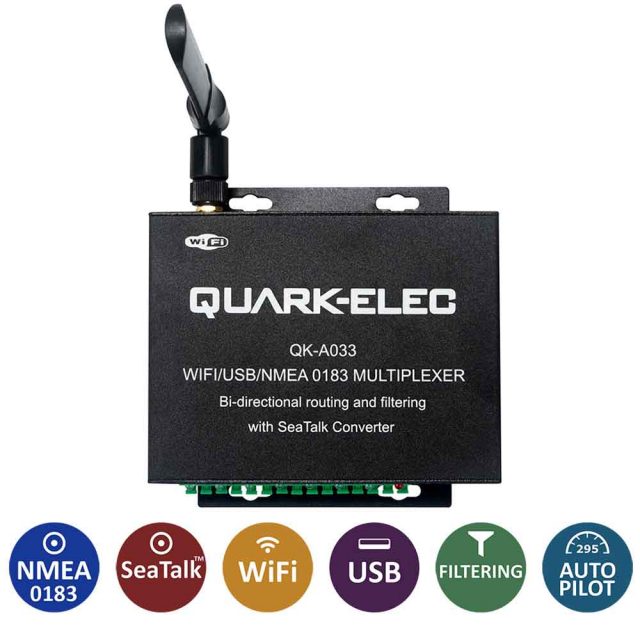 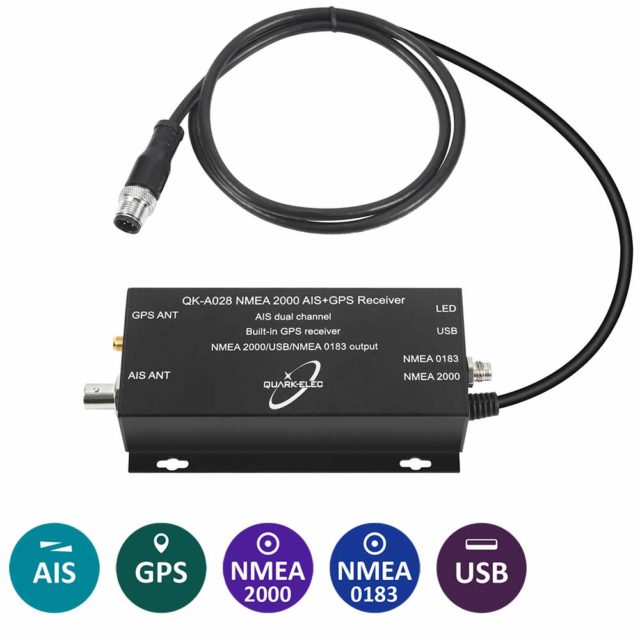 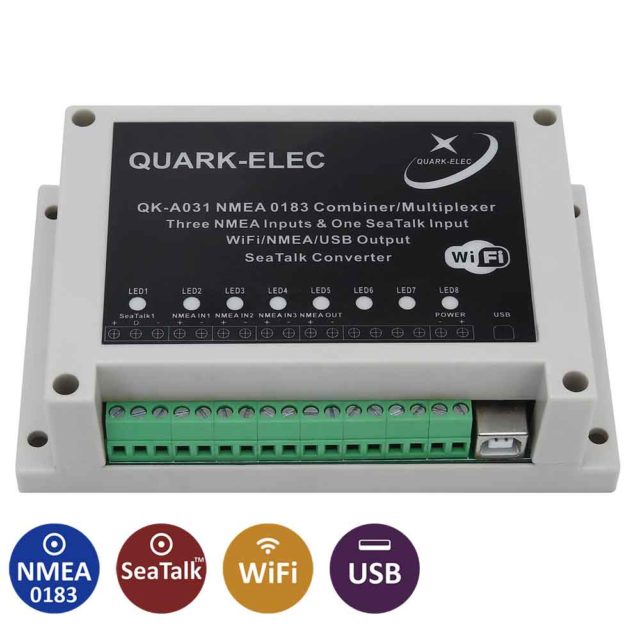 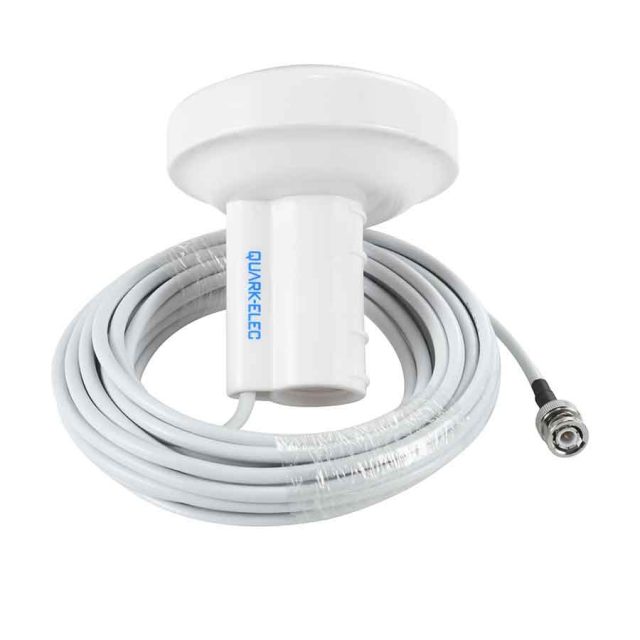 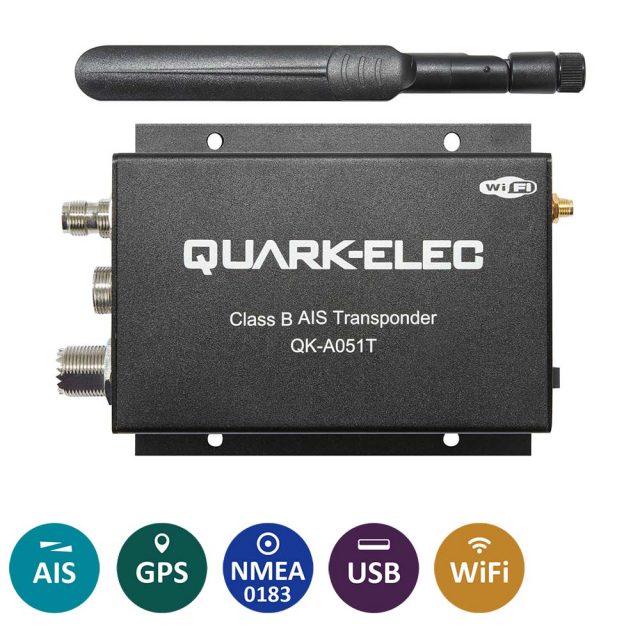 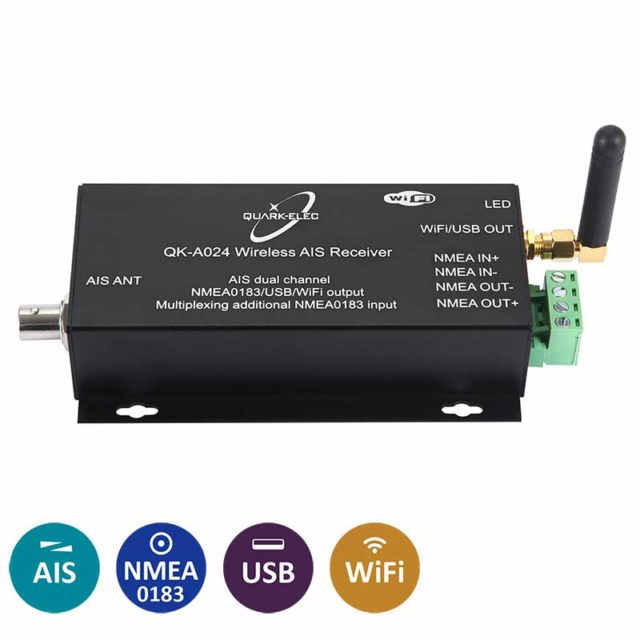 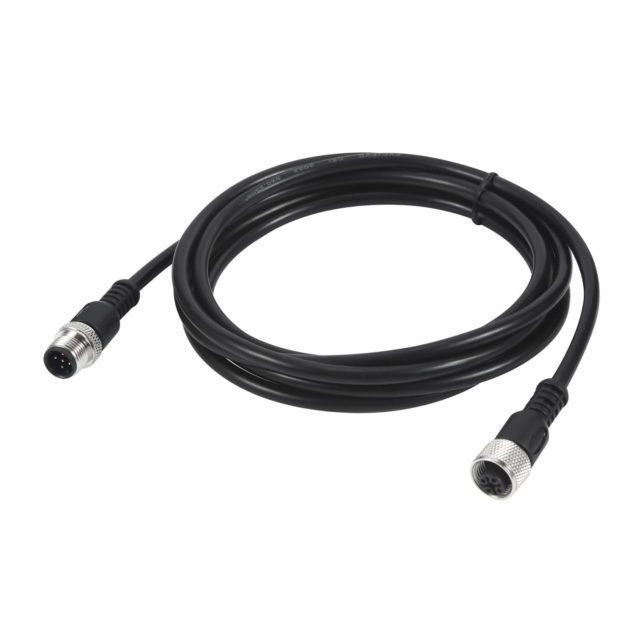 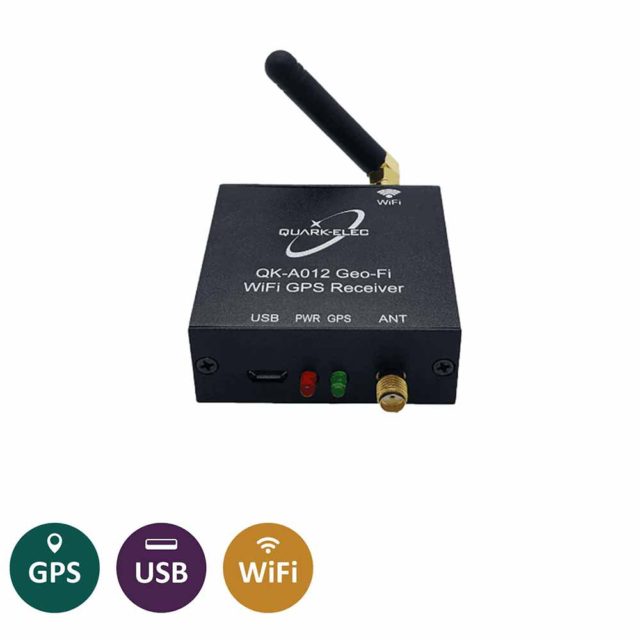 This website uses cookies to improve your experience while you navigate through the website. Out of these cookies, the cookies that are categorized as necessary are stored on your browser as they are essential for the working of basic functionalities of the website. We also use third-party cookies that help us analyze and understand how you use this website. These cookies will be stored in your browser only with your consent. You also have the option to opt-out of these cookies. But opting out of some of these cookies may have an effect on your browsing experience.
Necessary Always Enabled
Necessary cookies are absolutely essential for the website to function properly. This category only includes cookies that ensures basic functionalities and security features of the website. These cookies do not store any personal information.
Non-necessary
Any cookies that may not be particularly necessary for the website to function and is used specifically to collect user personal data via analytics, ads, other embedded contents are termed as non-necessary cookies. It is mandatory to procure user consent prior to running these cookies on your website.
SAVE & ACCEPT

Not registered yet? Register